WAN-IFRA Women in News has named Etaf Roudan, director of Radio al-Balad in Jordan as its 2020 WIN Editorial Leadership Award Laureate for the Arab Region.

Radio journalist and editor Roudan is the first Jordanian woman to head a community radio station. She is also the editor-in-chief of a community newspaper. For much of her 15-year career, Roudan has focused her journalism on women’s issues and empowerment. She has been an advocate for press freedom in her writing and through many of her projects. She has built a reputation for pursuing topics that celebrate women and equality, and for breaking down social and political barriers through her reporting.

Roudan was nominated for her dedication to press freedom, the empowerment of young women journalists, and as a champion of equality. 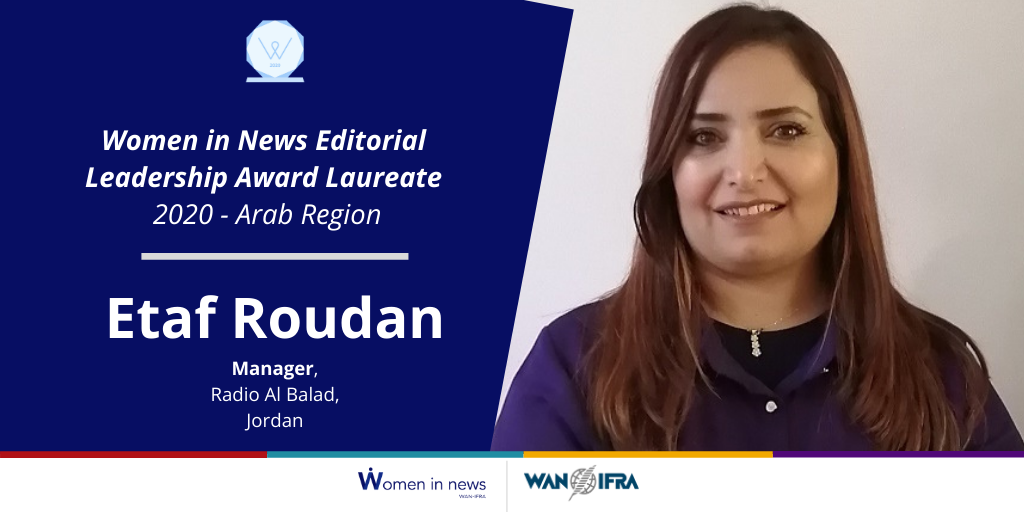 The WIN Editorial Leadership Award  is given annually to outstanding editors, one from the Arab Region and one from sub-Saharan Africa, in recognition of excellence in leadership, and an unwavering commitment to equality and press freedom. Candidates are selected by a committee comprised of members of the WIN Steering Committee and previous Laureates. This year’s laureate for sub-Saharan Africa is Mary Mbewe, who was announced on September 8, 2020.

Between 2012 and 2016, Roudan headed a programme to empower women from Al Zarqa’ region in Jordan using media and journalism training as a way of involving them in decision making processes. Through this programme, she contributed in the training of nearly 75 women.

Roudan was also one of the founding members of a project titled “Your Voice...Your Identity”, focusing on providing media and journalism training to women in Jordan, helping them gain more confidence in their skills, as well as encouraging them to cover a wider range of topics and interests. The project also highlighted the important issues facing Jordanian women, especially in marginalised communities.

Roudan, who participated in Women in News programme in its first year in the Arab Region in 2016, currently anchors a radio programme on Radio al-Balad, which she uses to focus on the intersection between society, women, and politics.

Under her leadership, CNN’s morning show "Voice of the pandemic" awarded Radio al-Balad for their excellent media response on Covid-19, specifically for the show "Together to overcome Corona.”

In her acceptance letter to Women in News, Roudan said that the award motivated women in the Arab Region who work in the media and who face multiple challenges; reminding them that the effort they put into this profession is not lost. “This award motivates everyone, especially the new generation, to work with passion and honesty to harvest similar outcomes. This award is particularly important for me, and for my daughters, because I always push them to work to become strong women in the future,” she said.

"It is an honour to name Etaf Roudan this year's Laureate for the Arab Region,” said CEO of WAN-IFRA, Vincent Peyrègne. “Etaf has played an important role in shaping the media landscape in Jordan. Her leadership and championing of other women has changed the face of journalism. Her work has enabled greater participation from women ensuring their stories are heard in shaping public debate."

Acil Tabbara, WIN Editorial Leadership Award Laureate for 2019 in the Arab Region, said: “This award is an important recognition of -the work of- women journalists in the Arab world. Women have increased both their presence and visibility in the Arab media over the years, but their accomplishments are not always recognised or rewarded and their way to the top echelons of news organisations still remains more difficult than male peers.”

The US-Jordan Defence Cooperation Agreement is not new