Two Amman-based Rotarian clubs participated in the October cancer awareness program by listening to a lecture from an expert from the King Hussein Cancer Center Wednesday.

Dr. Yassar Qutaiba, Director of the Early Detection/Community Outreach Program at King Hussein Cancer spoke at a joint event organized by the Amman West Rotary Club and the Amman International Rotary at the Landmark Hotel.

Qutaiba outlined how tumors start in body tissues explaining that not all tumors are malignant but while benign tumors don’t spread in the body the malignant tumors spread quickly and therefore early dedication is a crucial part of overcoming the risks of cancer.

The cancer expert explained that worldwide cancer is the second cause of death (after heart problems) causing four million fatalities annually. “However, it is expected to become the number one source of deaths by 2030 when estimated say that 27 million persons around the world will die from cancer by that year.”

In Jordan, Qutaiba said that cancer death has been rising reaching 70914 by 2018. She noted that 40% of cancer deaths can be prevented and another 40% can be healed if detected early and she pointed out that tobacco is a major cause of death again stressing that early detection can save lives. “Thirty percent of tobacco-causing deaths could be saved if they are discovered at an early stage while 70% pass away due to detection when the cancer is in the third and fourth stages.”

Dr. Qutaiba said that some symptoms that if persisting need to be checked by medical personnel because they could be early signs of cancer among them changes in gestor internal systems, loss of weight, loss of appetite, continued headaches, continuous and unexplained fever, skin injuries that don’t heal and blood in the urine. “While some of these symptoms might not mean that the person has cancer, it is important if they persist to get checked,” she said.

After the lecture, the guest speaker was honored by the two clubs who also exchanged flags. Rotary members enjoyed dinner with their medical guest. 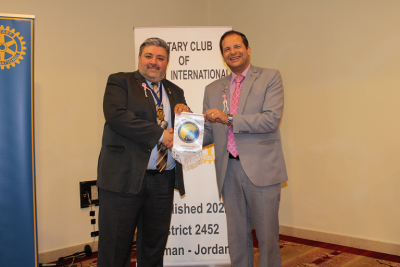 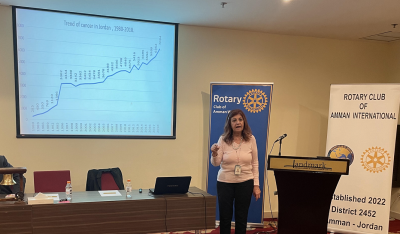