The Jordanian government is hoping to lobby Palestinian citizens of Israel to vote in the upcoming general elections in a bid to keep Benjamin Netanyahu from returning to power.

Amman wants to reach out to Raed Salah, a prominent Palestinian religious and political figure, through intermediaries from the branch of the Muslim Brotherhood in Jordan, a source from the group told Middle East Eye.

"Jordanian authorities have informed members of the Muslim Brotherhood movement using unofficial channels of their desire to engage with the head of the northern chapter of the Islamic Movement in occupied Palestine, Raed Salah," the source, who spoke on condition of anonymity, said.

Salah was the leader of the northern branch of the Islamic Movement in Israel until it was banned there in 2015 and is an influential figure among Palestinians, especially citizens of Israel.

Jordanian officials hope to persuade Salah to encourage his supporters to participate in the November Israeli elections, the source added, or "at least not push the boycott calls".

The northern branch of the Islamic Movement has historically boycotted voting in Israeli elections and refused to participate in politics.

Salah has publicly cited concern about normalising Israel through the vote and argued that Palestinian participation in the Israeli parliament, or Knesset, has not brought about any meaningful benefit for the Palestinian cause.

The source said it is therefore "impossible" for the Islamic Movement to take part in this year's vote despite Jordanian attempts to open a channel of dialogue.

The media office of Salah confirmed his unwillingness to take part in such campaigns and denied reports of any contact between him and Jordanian officials.

"There is no truth to the media reports that talk about communication between Jordan and Sheikh Raed Salah. Our position is clear in support of the boycott of the Israeli Knesset elections," Salah's office told MEE.

Salah has been previously turned away from entering Jordan. He is currently banned by Israel from leaving the country.

MEE contacted the government's official spokesperson, Faisal al-Shboul, but did not receive a response at the time of publication.

The informal discussions held with the head of the Muslim Brotherhood in Jordan were initiated by a former interior minister.

According to Jordanian columnist Bassam Badarin, the main focus of these unofficial talks was finding ways to increase voter turnout among Palestinian citizens of Israel in the November vote.

At least two lists of parties representing Palestinian citizens of Israel are expected to run - the United Arab List or Raam, and the Joint List.

The former broke from the Joint List ahead of the 2021 election and later became a part of the Bennett–Lapid government, with four seats in the 120-seat Knesset. The Joint List was in the opposition with six seats.

High turnout among Palestinian voters is sought to ensure that Raam keeps its seats and plays a role in a new alliance with the current caretaker prime minister, Yair Lapid, if his centrist Yesh Atid party scores enough votes.

"Jordan's interest is similar to that of Lapid and Washington, who do not want to see Netanyahu back in power since he represents a return to Trump's 'deal of the century,' which was rejected by Jordan," Badarin told MEE.

"The Muslim Brotherhood suggested that Jordan officially invite Sheikh Raed Salah to the kingdom, and they can speak directly with him," he said.

The media office of the Muslim Brotherhood in Jordan denied to MEE that it is playing a mediating role between the two sides.

A spokesperson of the movement also denied that a visit by Khaled Meshaal, head of Hamas's diaspora office, to Jordan last week was connected to the purported talks.

Ties between Jordan and Hamas, the de facto controlling power in Gaza and which is close to Jordan's Muslim Brotherhood, have been strained since the late 1990s but in recent years have taken a positive turn.

However, a Muslim Brotherhood spokesperson said this visit was different from previous personal ones in that he "was allowed to meet with Jordanian political and media personalities".

Also on Jordan's agenda is the goal of reducing friction between different Palestinian forces within Israel, according to Badarin.

As part of this effort, Jordan has sought to communicate with Mansour Abbas, leader of Raam and deputy head of the southern chapter of the Islamic movement, according to Hamadeh Faraneh, a columnist specialising in Palestinian affairs.

"Mansour was recently a guest of King Abdullah twice. One was an official visit, but the other meeting was not announced," Faraneh told MEE.

The Islamic Movement in Israel split in 1996 over disagreements on participation in Israeli politics, with the southern branch in favour and the northern branch against.

The two have been at odds since and criticism has been levelled against Abbas by former leaders of the now-outlawed northern branch for joining the Naftali Bennett government last year, which included far-right parties. 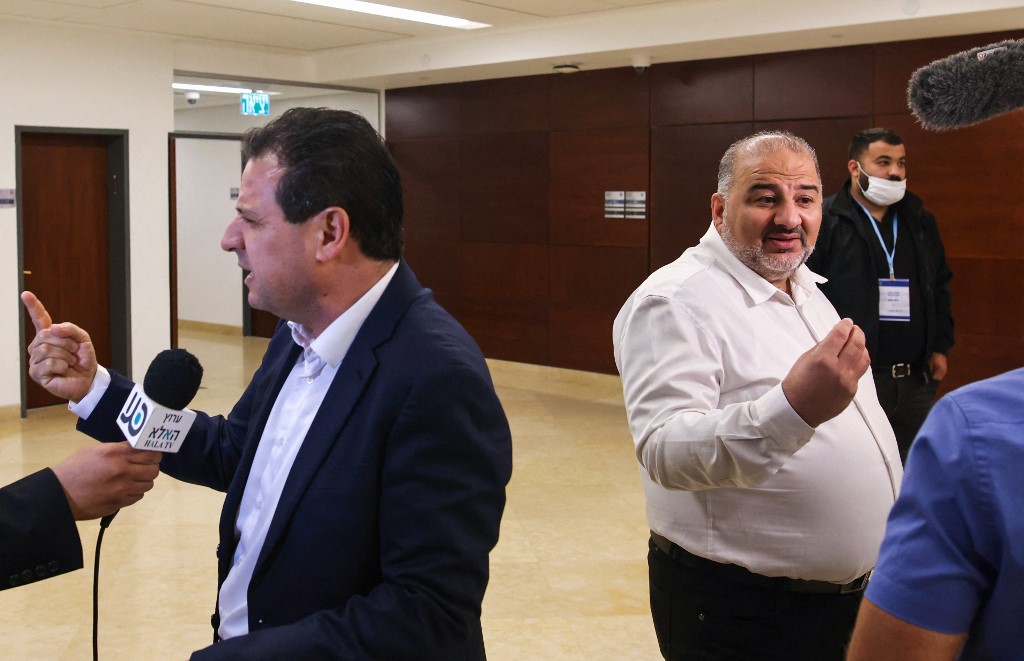 Raam was also lambasted by members of the Joint List alliance, headed by Ayman Odeh.

Amman would "ideally" want to remove the friction that exists between the northern branch and the Joint List on one hand and Raam on the other.

The Jordanian effort stems from the desire to "stop Netanyahu from returning to power," said Zaki Bani Irsheed, the former general secretary of the Islamic Action Front party, the political wing of the Muslim Brotherhood in Jordan.

"The Jordanian state can play a role in this field," Irsheed told MEE.

"More precisely, Jordanian diplomacy can open a dialogue with the Islamic Movement."

According to the latest election polls in Israel, a Netanyahu-led bloc of right-wing and far-right parties is projected to win 59 seats, one seat away from being able to gain a majority.

The Lapid-led bloc, which includes Raam, will win 55 seats, according to the poll. The remaining six seats are set to go to the Joint List.

Some Palestinian citizens of Israel, who make up around 20 percent of the total population, have been calling for a boycott of the vote, especially after Israel's recent three-day assault on Gaza and continued raids on al-Aqsa Mosque and the West Bank.

In the most recent election, held in March 2021, voter turnout among Palestinian citizens of Israel was one of the lowest ever at about 45 percent.

'Anyone is better than Netanyahu'

Relations between Jordan and Israel deteriorated under the premiership of Netanyahu between 2009-2021, which is why Amman is keen on rallying Palestinians to keep him out of power, according to analysts.

In 2017, an Israeli security guard at the Israeli embassy in Amman killed two Jordanian citizens. The guard was released in a secret deal, but Netanyahu welcomed him back to Israel as a "national hero," which was perceived as an insult aimed at Jordan's King Abdullah.

Jordan also said that under Netanyahu Israel had been undermining its role as the custodian of Muslim and Christian holy places in occupied East Jerusalem by enabling more settler stormings of Al-Aqsa Mosque.

The alliance between then US President Donald Trump and Netanyahu was also not warmly welcomed in Amman, especially after the long-touted Vision for Peace plan was revealed in January 2020, which broke away from the two-state solution.

Netanyahu's pledge to annex parts of the Jordan Valley in the occupied West Bank has also drawn the ire of Amman, which said that such a move would imperil peace treaties between the two countries.

Mohammad Momani, a former Jordanian minister of media affairs and now a member of the Senate, told MEE that "for us in Jordan, anyone is better than Netanyahu" when asked about news of possible Jordanian talks with forces within Palestinian groups in Israel.

This is why Jordanian officials have attempted to reach out to leaders like Salah, Palestinian-Jordanian writer and commentator Daoud Kuttab told MEE.

But it is unlikely that Jordan is planning to invite the Umm al-Fahm-based leader to Amman, he added, so as not to "boost his stature".

"The best thing that Jordan can hope to accomplish is to lower the boycott rhetoric among Palestinian citizens in Israel with the hope that this could increase voter turnout," Kuttab said.