The troubles of the Latin Patriarchate of Jerusalem have been further increased with a lawsuit filed in the superior court of the California county of St. Bernardino. The case by Benjamin Seryani a Jordanian American businessman is demanding $31 million dollars for debts incurred by the American University of Madaba (AUM). A Latin parish source in Jordan told AmmanNet that “the case is built on wrong and mistaken information and is not based on documentation.”

It is unclear if the financial request is accounted for in the statement of the AUM debt that the Latin patriarchate referred to in its June 12th statement.

That statement noted that the “Latin Patriarchate of Jerusalem (LPJ) has a huge deficit of about 100 Million US Dollars, because of past operational mismanagement, connected to the American University of Madaba. Archbishop Pierbattista Pizzaballa  was appointed Apostolic Administrator in order to organize a solution to these problem. In the last four years, an important work of reorganization of the administration has taken place, with proper internal controls and limitations. With the accumulation of a huge debt, despite the many efforts made to fundraise, it became clear that the only possible solution is to sell some properties.”

The Latin parish source in Jordan told AmmanNet that the statement “implicitly means an apology by the patriarchate regarding the mistakes carried by some in the name of the church. They have betrayed the trust of the church and have caused administrative and financial havoc and corruption. The deficit mentioned in the statement is largely due to the cost of building this prestigious university,” the source explained.

Reasons for the financial deficit

The church source said that the “deficit caused to the owners of the university came as a result of loans and operating expenses in the first years of the launch of the university. This includes” bad management at times and at different locations, lack of plans and proper studies as well as the absence of priorities. It is also due to irresponsible actions by some,” he said. The source insisted that “holding negligent people and those who were administratively untrustworthy accountable is now being dealt with in the courts and already a number of decisions have been taken and more will come.”

Pope John Paul II had gifted, during his visit to Jordan in March 2000, the land for which the university was built and Pope Benedicts had contributed 15 million euros for the establishment of the university during his June 2009 visit to Madaba. But the operational cost of building the university was much higher than the amounts budgeted. Debt started to accumulate which forced the university in the periods of 2009-2012 to take a total of JD 37 Million of loans from five Jordanian banks. This loan was later settled by a 2015 Euro 50 million loan from a Swiss bank with Vatican guarantee

For the past two years the Archbishop Pierbattista Pizzabella, the Apostolic Administrator of the Latin Patriarchate has been trying to sell a strip of land in the north west of the West Bank. The Palestinian government had offered to buy the land in the Tayseer area but in the end that fell through. Ramzi Khoury the head of the Higher Presidential Committee for Church Affairs in Palestine told Ammannet that efforts have not stopped to find a trusted buyer. “Unfortunately, the financial status of the Palestinian government does not allow it to buy that land and instead we are trying to find a trusted person in the Palestinian private sector to buy it.” Without a sale of the West Bank land, the Patriarchate was forced to sell lands that are not endowed and far away from the center of Nazareth to a known Arab investor in Israel.

Tens of demonstrators protested to this land deal outside the Church of Annunciation in Nazareth June 21st. They said that they were against the sale of a 300 dunum plot on the Nazareth mountain to pay back the debts from the university. A poster with the slogan the land of the annunciation is not for commercial sale was distributed as protestors called for an advisory committee to be established parallel to the work of the Patriarchate committees to stop the sale. The church insists that the land being sold is not Church endowment and that it had no choice but to sell the land to pay back the loan from the Swiss bank. Church officials say they offered members of the parish a chance to buy the land and despite many promises no one came up with the needed money. At the same time the Patriarchate has agreed to sell a 30 dunum plot in Nazareth to members of the parish while keeping a larger 100 dunum plot for future developmental needs of the church.

The parish source explained to Ammannet that the “church is a single parish covering four countries-Palestine, Jordan, Cyprus and Israel, and that its invests in all locations and sells such lands when it needs to.” The source said that Palestinians under occupation “live in difficult situation and therefore the Patriarchate of Jerusalem has invested a lot in housing projects for Catholic families in Jerusalem, Bethlehem, Nazareth and Bir Zeit as well as in other investments that provide work for young people and help them stay on the land to protect it and ensure that families’ future is ensured.” 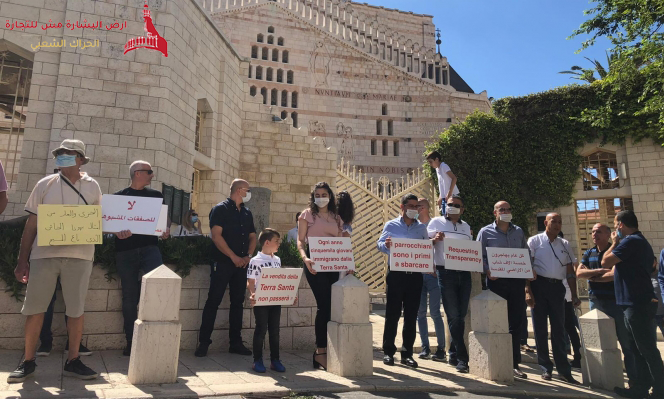 The case (Benjamin Syrani vs. Holy See et al) was initiated in the California superior court of San Bernardino County on August 23rd 2019. The law suit which lies in 87 pages (see attached court document) details what it refers to as internal struggles, chaos and mismanagement. Parallel companies are established to avoided responsibility, the plaintiff says and senior Church officials have used personal bank accounts in Jordan and the US.

The source in the parish replies that the plaintiff in this case Benjamin Seryani “has a number of lawsuits against him in Jordan and other institutes such as the social security agency and banks.”

In the Superior court of San Bernardino, the judge ruled Tuesday June 23rd the right of the plaintiff Benjamin Seryani to request the deposition of representatives of the Vatican, the Patriarchate, and officials at the American University of Madaba. The source in the Latin parish in Jordan told Ammannet that the depositions “are limited to discuss issues of jurisdiction in the California court.” The source insists that “there are no legal connections to American courts with this case.”

Seryani and his company Synergy Select One is demanding compensation in the amount of $31 million for management fees, expenses, debts to the university and lost cafeteria and transportation contracts. The Latin parish source replies that “an audit company in Jordan studied the issue and reached the conclusion that the university doesn’t owe the plaintiff anything.” Furthermore, the source says that Synergy Select One was decommissioned in 2014 by the state of Indiana even though the plaintiff requests payment for work past that date.” The source says that Seryani “took his compensation for the contracts with AUM and signed the relevant documents for that.” The source also noted that the plaintiff had “filed a similar suite in the state of New Hampshire but that case was dismissed.”

In the law suit, Seryani holds the Vatican and the Patriarchate as well as church official’s responsibility “for faltering on honoring signed contracts, participation in money laundering, forging inheritance awards for the family of a dead priest. All the accusations are considered illegal acts according to Jordanian and US laws. Seryani says in the lawsuit that he was punished for not going along with these schemes by being fired and losing the benefit of long-term transportation and cafeteria contracts.”

The problems of AUM had remained behind closed doors until the Patriarchate announced in June 2020 the huge debt that had incurred in the set-up phase of the university.

Plaintiff Benjamin Seryani refused to comment on the case but said he believed in the American judiciary and he remains a committed member of the Catholic church. AmmanNet has also approached the spokesperson of the Latin Patriarchate which refused to comment. The Vatican also has not commented despite being asked to do so.

The Latin Patriarchate considers that “the American University in Madaba “one of the most promising universities in the region. Its goal is to serve the community, the homeland and the church which supports its sons in Jordan, Palestine, Arab countries and foreign citizens. The Latin Patriarchate has been committed about educating its parish and others since more than 150 years.”