Why Jordan’s identity can’t be bought

The deal of the century promises billions of dollars — and a future of regional instability.
English 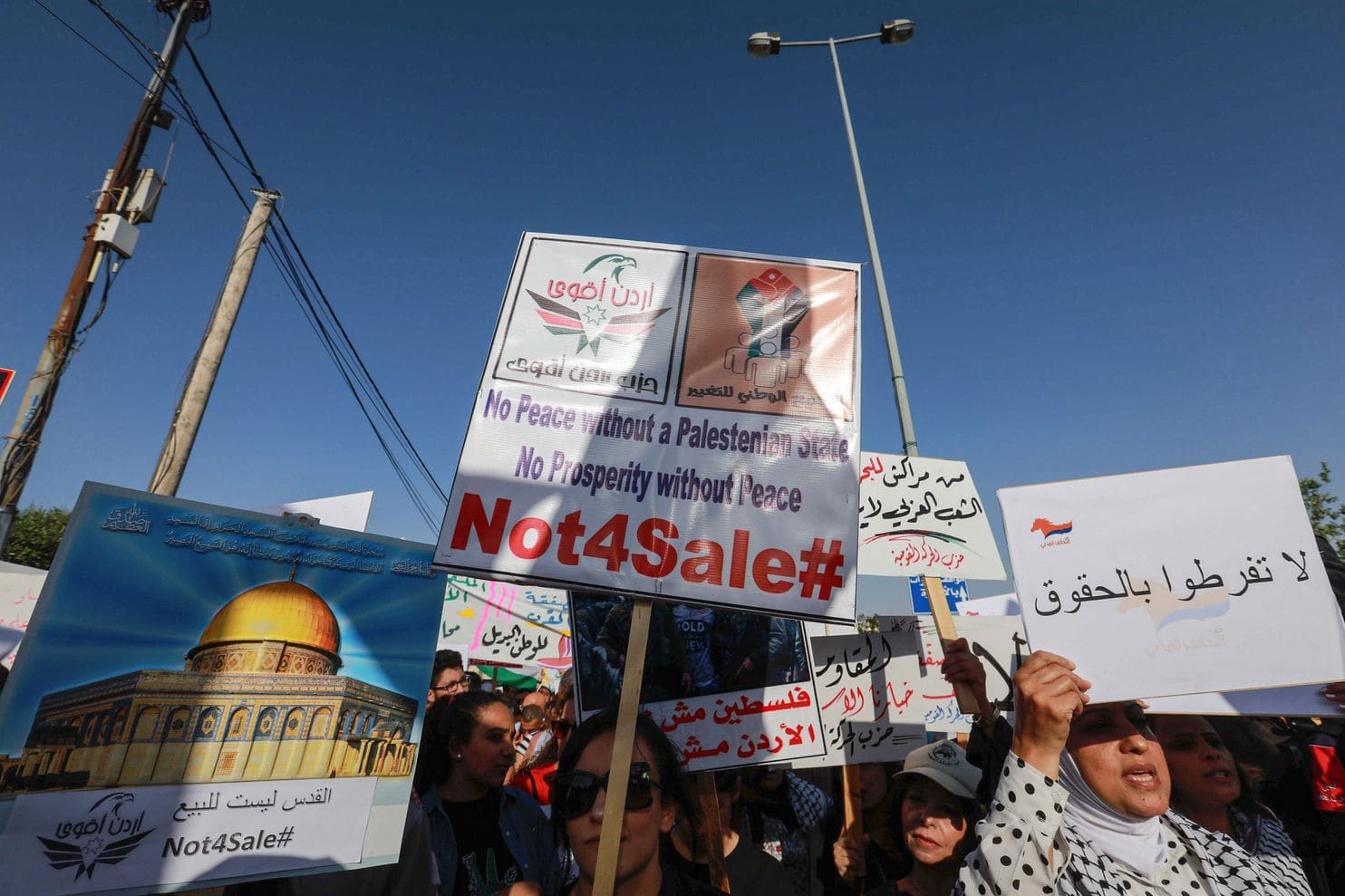 Pressured by Israel, Saudi Arabia and the Trump administration, Jordan is attending Tuesday’s U.S.-sponsored peace conference in Bahrain. It does so with gritted teeth, because this may herald an existential crisis that will upend its stability in the coming years. Despite neither Israel nor the Palestinians sending official delegations, the multilateral summit is the economic kickoff to the “deal of the century.” It will promise tens of billions of dollars to the Palestinian territories and Arab neighbors, including Jordan, as incentive to accept a plan that will foreclose Palestinian statehood. Suffering a financial tailspin, Jordan would normally jump for more foreign aid, with foreign debt almost matching all economic output, and unemployment at nearly 20 percent.

The problem, however, is one of national identity, or lack thereof — and more aid cannot buy Jordan one. Jordanians fear that the deal of the century means making their kingdom an “alternative homeland” for Palestinians, who will enter through mass resettlement or a confederationwith whatever part of the West Bank that Israel does not want. This Jordan-is-Palestine proposal originated among the American and Israeli right wing in the 1980s with a simplistic logic: If Israel does not want the Palestinians, give them to Jordan. This is also the nightmare uniting Jordanians in collective resistance. The question of “who is Jordanian” has always been difficult to answer, given the kingdom’s short history, societal diversity and openness to refugees. But while Jordanians may not agree on what Jordan is, they know what it is not — Palestinian territories.

Because of influxes of Palestinian refugees from the Arab-Israeli wars, themajority of Jordanians today are of Palestinian origin. They nevertheless recognize the alternative homeland scenario means destroying the right of return, as well as conceding the dream of Palestinian statehood. Tribal Jordanians from East Bank backgrounds, the historical support base of the ruling monarchy, fear this will reduce them to a demographic sliver while aggravating the communal tensions left by the 1970 civil war, still a taboo topic. The Hashemite monarchy adamantly rejects this option, because it will trigger unrest, hammer the economy and end its symbolic custodianship over the Jerusalem holy sites. For a kingdom that is no stranger to protests, such astounding consensus validates what many political scientists know: Identity is not material, meaning the ideas and norms that construct a national self-conception take a long time to evolve. They cannot simply be imposed or bought.

There are three indicators that signal the severity of the crisis. First, the international media, including even Israeli outlets, have raised sharp concerns about Jordan’s future with an alarmism not felt since the Arab Spring. Second, Jordanian political discourse has been saturated with citizens evoking an almost histrionic sense of patriotic loyalty, with King Abdullah’s popularity spiking even among usual critics. A careful reading of local media also shows fear on all sides — fear by tribal Jordanian elites of losing “their” land, fear by Palestinian-Jordanians of suffering civil conflict, and fear by the monarchy of geopolitical cataclysm. As one official warned, if Jordan, a strategic Western ally and peace partner of Israel, is shaken, then the region may burn.

Finally, the ruling monarchy has adopted a wartime footing in its outlook, reinforcing how domestic politics and foreign relations mirror one another in Jordan’s struggle for regime survival. Last summer, Jordan experienced mass protests against austerity measures, which helped usher in the current prime minister, Omar Razzaz. In March, as international pressures and domestic uncertainties mounted, the regime cracked down. It installed new leadership at the intelligence services, sacking dozens of officers believed to have operated beyond their remit. It shuffled Razzaz’s cabinet and elevated a renowned conservative as interior minister, who more aggressively arrested youth leaders from Jordan’s many hirak activist movements. The message: In a time of unprecedented crisis, domestic security takes precedence.

Meanwhile, Jordan has diversified its foreign policy. In recent months, it made much-publicized overtures to Turkey, Iraq, Iran, Russia and Qatar — all countries outside the Israel-Saudi-American axis backing the deal of the century. The search for new alliances is a logical response for a small state such as Jordan, which no longer feels secure relying upon its traditional foreign patrons. For instance, Saudi Arabia has increasingly conditioned aid upon geopolitical goals; in April, it offered a billion dollars if Jordan classified the Muslim Brotherhood as a terrorist group and, more recently, hinted that future support would require acquiescence to the peace deal. Jordan also feels betrayed by its historic patron, the United States (despite King Abdullah’s seven visits to Washington since 2017). It sees the Trump administration’s unilateral moves against Palestinian statehood since 2018 — moving the U.S. Embassy to Jerusalem, closing the PLO Embassy in Washington, and cutting off aid to the United Nations Relief and Works Agency for Palestinian territories Refugees (UNRWA) and the Palestinian Authority — as unprecedented.

In public, Jordanian officials have justified attending the Bahrain talks pragmatically: better to be inside the room where decisions happen, where it can disrupt the process and advance Palestinian interests. Privately, they describe being subjected to glorified blackmail from key advocates of the peace deal, from President Trump’s son-in-law and adviser Jared Kushner to Saudi Crown Prince Mohammed bin Salman. They are grudgingly assenting, given that Jordan needs U.S. and gulf foreign aid today to maintain its huge public sector, expensive military, and the cost of absorbing nearly a million Syrian refugees. However, so long as the alternative homeland scenario is a potential outcome of what happens Tuesday, the kingdom could face an existential crisis of national identity. Thus, the deal of the century may ultimately wreck two states — the Palestinian territories and Jordan.