The archbishop of the Orthodox Church Cristophorus Atallah has ignited internal Christian-Christian tensions after a letter that he had sent to the head of the judicial court included harsh terms to fellow Jordanian Christians whose churches have no ecclesiastical courts.

The January 26th 2021 letter, sent to Judge Mohammad Al Ghazo head of the Judicial council, is titled “law suits by Christians belonging to unrecognized churches.” In the letter the Orthodox archbishop says: “there are great dangers from the teachings and ideas that are disseminated by these groups that are being spread within the Christian society. These are strange ideas that depart from our Christian faith and the national identity of the local church. In addition, these groups are funded from abroad and have outside and unclear agendas and we have reservations about them.”

The letter was signed on behalf of the Council of Church Leaders in Jordan with copies sent to the Royal Court and to the office of Prince Ghazi. No copies were sent to the Minister of Justice or any government official. AmmanNet has learned from a number of members in the council of church leaders that they were not informed of the content of the letter in direct contradiction of an agreement that letters in the name of the council must have the consensus of all members before distribution.

The president of the Judicial Council issued a cover letter and distributed the Archbishop’s letter on January 31st to the heads of the regular civilian courts calling on them to “abide by its content.” The content includes calls that cases presented to regular courts for Christians who have no ecclesiastical court, to be referred to the Council of Church Leaders although this council has no legal standing.

Advocate Tagrid Doughmi who is specialized in the subject of religious groups said that the letter issued by the Judicial Council is a violation of clauses 5 & 6 of the Law for Christian Denominations number 28 for the year 2014. Those clauses state clearly that the regular courts are the one that are “obliged to deal with cases brought to it by Christians who have no ecclesiastic court so long as it rules with fairness and justice and in accordance to the beliefs of these denominations. This applies to the cases where there are no written principles or if the written basis is in doubt. The court is to apply the basis of the nearest denomination to the one applying to the regular court”

Doughmi says that the Jordanian constitution guaranteed to all citizens irrespective of religion from any discrimination in rights and responsibilities. Jordan has also approved numerous international treaties that guarantee the right to worship. If there is a contradiction between national laws and human rights laws then human rights law shall supersede. This has been what international law and Jordan’s own appeals courts have agreed to.

Reverend Habes Neemat the president of the Jordan Evangelical Council says that evangelical churches in Jordan are independent on both the administrative and financial levels and is headed by Jordanian citizens. “Thousands of citizens are members of these churches who insist on their full rights of equality without discrimination-based o religion or doctrine” says Neemat.

AmmanNet also connected with Reverend David Rihani head of the Assemblies of God denomination in Jordan which is a founding member of the Jordan Evangelical Council. Rihani says: “there are nearly ten thousand members in evangelical churches who worship in 70 locations thorough Jordan. Evangelical churches have existed since the establishment of Jordan and their marriage certificates and other personal status documents have been accepted and registered within official government records for decades.

Rihani says: “the Assemblies of God church in Jordan was licensed by order of King Abdullah I in the beginning of the last century. The prime minister at the time approved on July 20th 19128 under # 5076/19/4 and licensed the purchase of land in as-Salt to build a Church and a school which Prince Abdullah at the time blessed. The Jordanian treasury also contributed in 1940 a piece of land to the church to build a graveyard next to the Orthodox graveyard in the Subeih area in as -Salt. “The church services have continued in as-Salt and other locations since and they are continuing till this day,” according to Rev. Rihani.

A joint Orthodox/Assemblies of God church was also established in the town of al Huson in 1946.

Rihani who is a member of the World Evangelical Council which has over 600 million members says that the issue of permitting the establishment of an evangelical court has not happened because of unjustified objections by some of the historic churches. These churches which refuse to cooperate with evangelicals in Jordan are cooperating with evangelicals in Syria, Lebanon and Egypt. The Palestinian leader Mahmoud Abbas issued a presidential decree in December 2019 recognizing the Evangelical Council in Palestine.

Rihani responded to what appeared in the letter of the Orthodox archbishop by saying: “no one has the right to attack our churches and our doctrine in this way because we are part and parcel of the Christian and Jordanian Christian family and our government which was ignored in this case must intervene and correct this injustice that has taken place against evangelical churches.”

Jordanian lawyer Muath Momani the legal advisor to “Lawyers without borders” told Ammannet that “Jordanians are the same in accordance to the law: Jordanians shall be equal before the law. There shall be no discrimination between them as regards to their rights and duties on grounds of race, language or religion.” This is what article 6 of the constitution states. In another article the defense of religion and belief is guaranteed by the constitutions. “The relevant governmental agencies must rise up and defend a denomination that is practicing its faith which is guaranteed by international treaties.”

Reverend Habes Neemat the president of the Jordanian Evangelical Council told AmmanNet “the leaders of the evangelical churches has met with Prince Ghazi and the director of the Royal Council about a year ago and since then we have followed the directives of his royal highness and have hired a well known legal office who has been in touch with official circles to resolve this problem and to ensure that our evangelical churches are added to the list of churches in accordance to the 2014 law for Christian denominations.”

The Jordanian Evangelical Council was established in 2006 and includes: the Baptist Evangelical Church, the Assemblies of God Church, the Evangelical Free Church, the Church of the Nazarene and the Christian and Missionary Alliance Church. All these churches are registered and their registration is recorded in the official gazette. Those churches carry out spiritual and humanitarian community work in various fields among them: education, health, refugees, orphans, widows, prison service and service to seniors.

Archbishop Christophorus Atallah had made a similar critical statement on Jordan TV during the beginnings of the pandemic. This upset some government officials at the time who had given the bishop air time on Jordan TV to explain and support the health provisions that that ministry of health wanted to talk about. 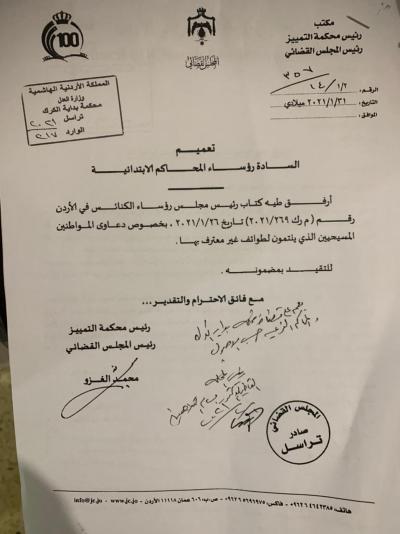 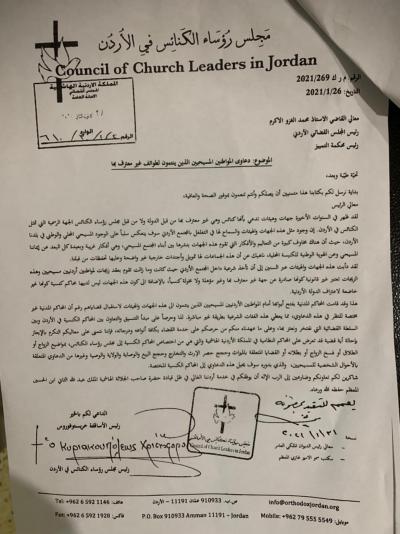