The January 10th letter sent to Jordan’s ambassador in Washington Dina Kawar calls for the   release on bail by the US citizen until the case of “a stolen check” is resolved in Jordanian courts. “He has been imprisoned for over a month over an accusation of writing a check without sufficient funds,” the senators wrote and then relates that his family has told their offices that the check in question “were stolen by this employee prior to his departure and were never returned. They were reported to police at the time,” they noted.

In their letter the two senators noted that Justice Minister Bassam Talhouni is aware of the case but that Daoud “remains imprisoned without the opportunity to post bail he awaits the ruling from the courts. They also noted that the US State department is also “monitoring the situation” and has performed a health and welfare check on Mr. Daoud.

Copies of the letter where sent to the deputy secretary of state Stephen Biegun and Karen Sasahara charge d Affaires at the US embassy in Amman. 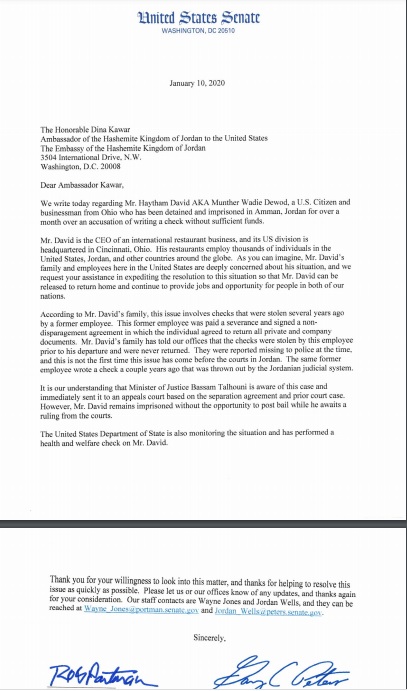 Polls:The majority of Jordanians (66.5%) are in favour of cancelling the gas agreement

The deal of the century..Jordanian rejected what is the next step

Oreiqat: holy Jerusalem sites will only be under the guardianship of king Abdullah